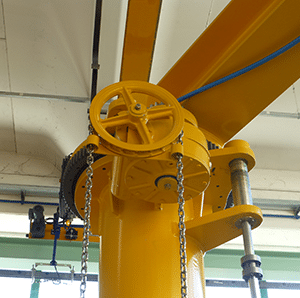 The manually rotated crane is a GBRM series jib crane.

This type of jib crane is used with the intervention of the staff who, by MANUALLY sliding the chain vertically, moves the ROTATTION BOOMS 360 ° thus facilitating the work of the machine, being able to transport and move the load to multiple work points.

The operator in charge of handling the crane by means of a slight manual push of the lifted load can direct the load of the machine in one direction rather than another.

An investment necessary for a high return in any work environment, indoors and outdoors.

In many cases, jib cranes are the only possible solution when other means of lifting and transport cannot be used. SWIVEL ARM made, depending on the capacity and length, in steel beam with unified profile or in box beam with internal stiffening diaphragms. It is equipped, like the column, with a perforated flange designed for the application of the fifth wheel to which it is connected with high-strength bolts. COLUMN In self-supporting steel with special circular and / or octagonal profile, it guarantees good rigidity. The column is also equipped with a base plate for anchoring the base, and at the upper end of a perforated flange prepared for the application of the fifth wheel. ROTATION MECHANISM consisting of an axial base bearing (fifth wheel) capable of counteracting both the vertical thrust and the tilting moment, and a gearmotor mounted on the arm, with self-braking motor with starting and progressive braking, whose pinion, keyed on the slow shaft, meshes with the internal toothing of the fifth wheel. The assembly system, the precision of the fifth wheel and the sensitivity of the gearmotor, ensures perfect rotation of the arm. The cranes can be equipped with rope and / or chain hoists.